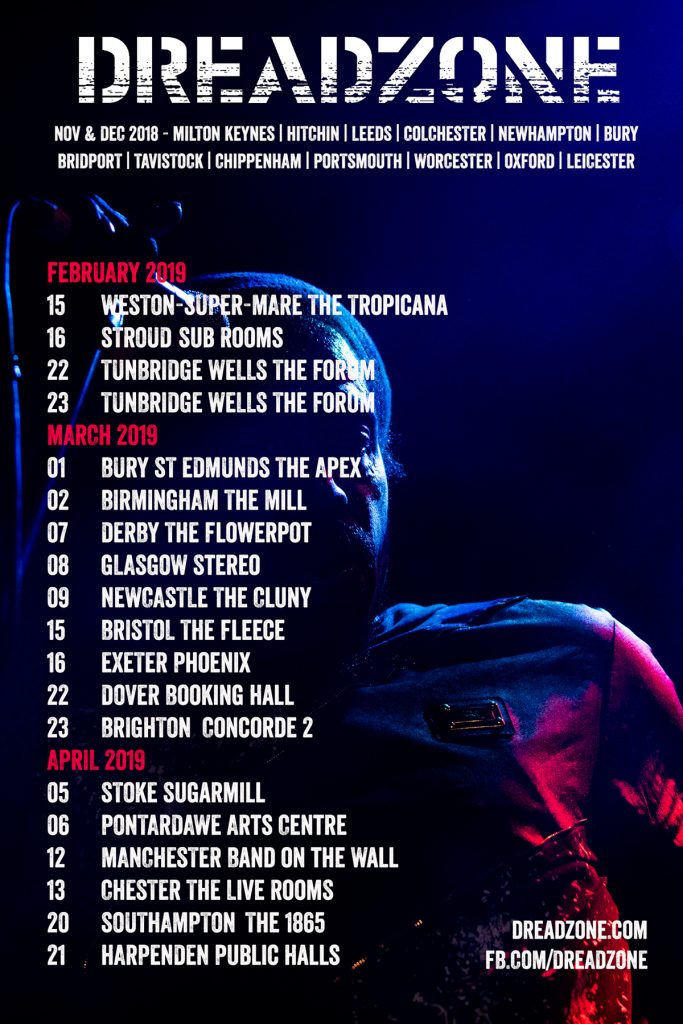 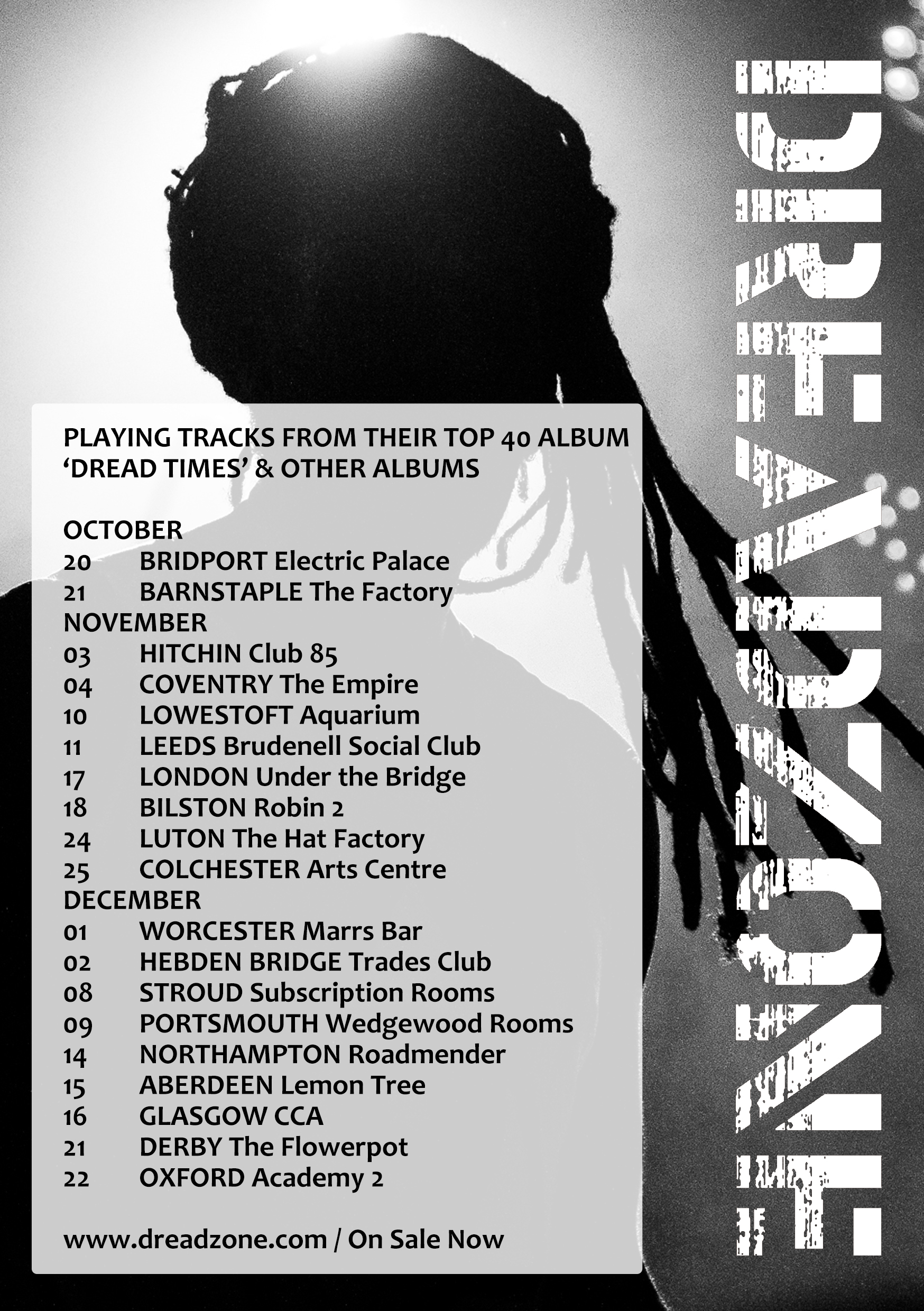 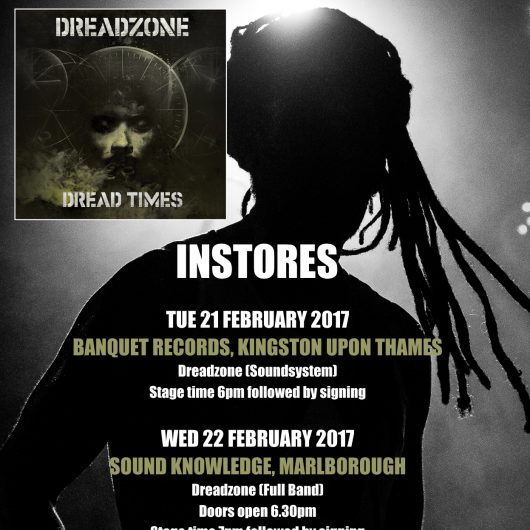 We will be playing some tunes, meeting people and signing copies of our new album ‘Dread Times’ at Banquet Records and Sound Knowledge. Come and say hello!

Our new album DREAD TIMES is coming out on 17 February 2017 and is available to pre-order now. Its being released on CD, Double Heavyweight Vinyl and Digital with SIGNED copies available from our store

Alongside core members Greg Dread, who produced this 12 track album, Leo Williams, Chris Compton, Earl 16 and Spee, Dread Times introduces younger blood into the mix. Newest member Bazil bringing an edge to the sonic process and Greg’s son Marlon expanding the musical range further. Don Letts also returns with lyrical contributions, as does Lena Cullen on vocals for one track, with 90s ragga duo Louchie Lou and Michie One guesting on another. Recorded again at Mick Jones’ Bunker Studio, arranged at Dread Central and mixed by fellow founder Tim Bran, this is classic West London Zone with an updated edge. Dread music for an unpredictable world, these are Dread Times.

After a busy summer of some great festivals and finishing up our new album (more news on that very soon) we now turn our attention to the Autumn tour which starts this week and takes in some fine venues around the UK, refreshing the parts we haven’t been to for a while. We are looking to preview some new tunes from our forthcoming 8th studio album and put some changes into the set list, so look out, the return of the dread coming to a town near you soon with all the t shirts, hoodies, cd and vinyl goodies all on board. Tunbridge Wells has already sold out, some more looking likely to, so get online and book your bounce to keep warm over the coming months! ALL TICKET LINKS ARE HERE

After a busy few months crafting our new album we are now gearing up for the festival season it is going to be a fun packed Summer which is looking good for festival bouncing, first up is GLASTONBURY on the brilliant Glade Stage on SUNDAY 26 JUNE at 17:20, from there we head to Readipop on the Saturday 9 July and then to Tolpuddle Martyrs Festival on Sunday 17 July. On Saturday 23 July we head to North-East Wales for Llangollen Fringe Festival, then the next day Sunday 24 July are at Deerstock in Nottinghamshire. AUGUST is a busy month for us, first up on Saturday 6th is VW Whitenoise near Thetford, then onto Farmer Phils Festival near Shrewsbury on Saturday 13th August. On Saturday 20th August we grace the stage of Beautiful Days in Devon then head straight off to play at Weyfest on Sunday 21 August in Farnham. Bank Holiday weekend we head off up north to play Solfest in Solway,Cumbria on Friday 26th August, then a quick jump over to Bedale in North Yorkshire for Great Northern Mod & Ska Festival on Saturday 27 and last show of August on Sunday 28 August we head down to West Somerset to perform at Watchet festival. Last shows for the festival season are Jersey Live on Sunday 4 September and then on Saturday 10 September to close the season we play at Undercover Festival in Brighton.

After another great summer of festival escapades the autumn tour looms large again with the latest update from the zone. A new (re issue) album is out now, ‘Sound’ our 4th album from 2001, with bonus tracks on digital, CD and double heavyweight vinyl will be available on our tour along with the return of the Sound t-shirt and sweatshirts from the merch plus other goodies! The tour will feature a fair few tracks from that album and a couple of surprises, see all tour dates below

RE-ISSUED & REMASTERED SOUND is OUT NOW on CD, Double Heavyweight Vinyl and Digital. Our fourth album, it features contributions from Earl 16, Brinsley Forde and MC Det with lyrical input from Don Letts, who also coined the album title and has written sleeve notes for this new re issue. It’s also notable for the first appearance of MC Spee on the opening tune Return of the Dread. This remastered release features bonus remixes from Soul of Man and Drumattic Twins.